Eventually we all have to accept full and
total responsibility for our actions,
everything we have done,
and have not done.
~ Hubert Selby, Jr.

For we believers will be called to account
and must all appear before the judgment
seat of Christ, so that each one may be
repaid for what has been done, whether
good or bad, that is each will be held
responsible for his actions, purposes,
goals, motives - the use or misuse of
his time, opportunities and abilities.
~ 2 Corinthians 5:10 (Amplified)
at June 28, 2022

Real generosity is doing something nice
for someone who will never find out.
~ Frank A. Clark

Email ThisBlogThis!Share to TwitterShare to FacebookShare to Pinterest
Labels: generoisty

From 1949 to 1958 Pee Wee Reese was captain of baseball's Dodgers. Named not for his size, but for playing marbles as a kid with a pee-wee shooter. He was a great shortstop, a daring base runner, and a superb clutch hitter.

He was an eight-time All Star and sparked the Dodgers to seven National League pennants. He fielded the final ground ball in Brooklyn's first World Series championship in 1955. He never earned more than $35,000 playing the game he loved.

During his total of sixteen years on the field for the Dodgers, Reese was respected as a person as well as a ballplayer. His fellow Dodgers called him simply "The Captain" and deferred to his judgment on many matters.

He wasn't good at speeches. His leadership came from inner confidence, integrity, and consistency. His manner had the unpretentious effect of causing people to trust and follow him.

Just back from a three-year stint in the Navy during World War II, Reese had helped win a war against racial intolerance in Europe and was destined to be caught up in fighting the same injustices in his own country.

His team decided to break the barrier against black players by bringing up a young player named Jackie Robinson. Some of the Dodger players began circulating a petition in the clubhouse to protest the plan. The petition said in effect that the players signing it wouldn't play on a team with a black man.

Confident that Reese would sign it because he was a Southerner, it was shoved under his nose. "I'm not signing!" he said, and the petition died.

Robinson was with the team for spring training in 1947. Before a game in Cincinnati just across the river from Reese's native Kentucky, the ugliness was intense. Fans in the stands joined players in the opposing dugout to shout racial slurs at the black man taking infield practice at second base.

Pee Wee Reese raised his arm to halt the team's warm up. He walked from his shortstop position to second base and put his arm around Jackie Robinson's shoulders.

That event is viewed as a turning point in the history of baseball. By extension, it was also a major blow against racism in American society.

Robinson recalled: "Pee Wee kind of sensed the sort of hopeless, dead feeling in me and came over and stood beside me for a while."

"He didn't say a word, but he looked over at the chaps who were yelling at me . . . and just stared. He was standing by me. I could tell you that."

Sometimes you don't need to say anything to lead. Just be there. Stand for what you know is right. There is an eloquence in actions that words can't equal.

A good example is the best sermon.
~ Benjamin Franklin

In all things show yourself to be
an example of good deeds,
with purity in doctrine, dignified,
sound in speech that is beyond reproach.
~ Titus 2:7-8

Someone's sitting in the shade today
because someone planted a tree a long time ago.
~ Warren Buffett

Trust in the LORD, and do good;
dwell in the land,
and cultivate faithfulness.
~ Psalm 37:3

It only takes a split second to smile and forget,
yet to someone who needed it, it can last a life time.
~ Steve Maraboli

So then, while we have opportunity,
let us do good to all people.
~ Galatians 6:10

Email ThisBlogThis!Share to TwitterShare to FacebookShare to Pinterest
Labels: do good, smile

A real decision is measured by the fact
that you've taken a new action.
If there's no action,
you haven't truly decided.
~ Tony Robbins

Jesus said, Therefore everyone who hears
these words of mine and acts on them,
may be compared to a wise man
who built his house on the rock.
~ Matthew 7:24

E ventually we all have to accept full and total responsibility for our actions, everything we have done, and have not done. ~ Hubert Selb... 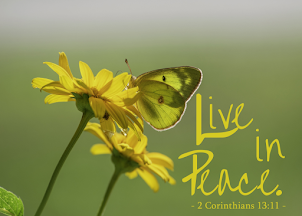